Are you tired of Hit and Run team development – where the facilitator comes in and works with your team – possibly at an expensive offsite retreat – and you all leave feeling optimistic about the futures and like you are an actual team, not a group of individuals?  Then… after a few weeks, workplace realities such as competition for the same resources, lack of communication, and unresolved conflict between teams start creeping back in. Before you know it, you are back to square one, with no REAL, LASTING change.

In order to make a lasting transition from a group of individuals to a high performing team, the team needs to start with Group Understanding leading to Team Development which is where team building programs generally leave off. The trust and momentum need to continue to be nurtured to build Team Cohesiveness, culminating in a High Performing Team.

Dawn’s model of Team Transformation is a process, lasting longer than the few days spent in a retreat. She starts the process of transforming from a group of individuals to a High Performing Team by meeting with all team members to discern the issues, using Everything DiSC assessments to shed some light on the individual differences and how people work together. The Five Behaviours of a Cohesive Team training will lead to new skills, identify areas that need to be worked on and start building trust and momentum. This is the BASIC groundwork for building an effective high-performance team. It is also, unfortunately, where many programs end and, without reinforcement and accountability, eventually the results fade away.

In order to effect a lasting shift in team culture, Dawn McCoy continues working with the team to normalize the new behaviours via team and individual coaching.  Once the ground work has been laid and the team has come together, the next step is to increase the team cohesiveness and ultimately the effectiveness. This will be the coaching phase and the purpose is to normalize the new behaviours and address the issues that were identified in the Team Development stage in order to transform the group into a high performing team. 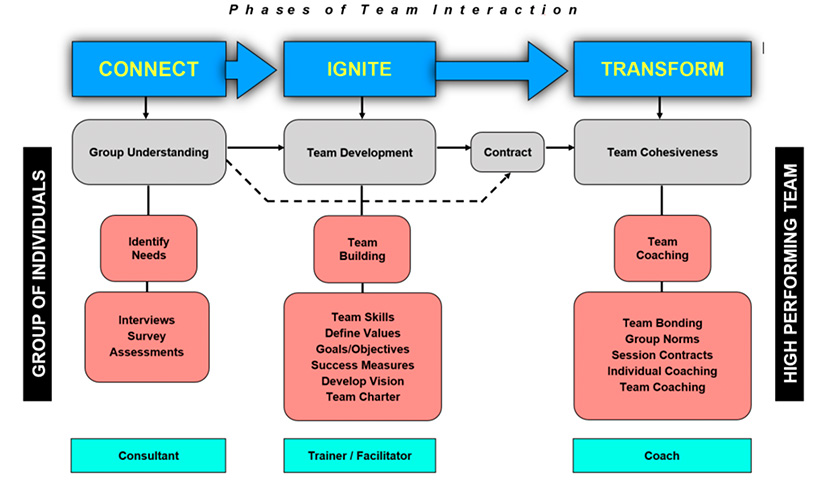